Quincy Jones with The AllStars Collective 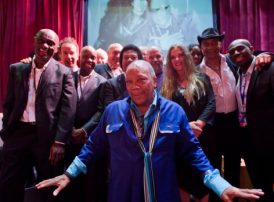 On Sunday, The AllStars Collective were the house band for an ‘Evening with Quincy Jones’ at the Britten Theatre in London’s Royal College of Music.

The AllStars performed a bespoke Overture to celebrate Quincy’s work as well as acting as House Band to back the 10 guest artists, including Jocelyn Brown, Hamish Stuart, Beverley Knight, Mica Paris, Sarah-Jane Morris, Kenny Thomas and Sonique that appeared to honour the great man.

The AllStars appeared as a 16-piece lineup including five horns, four backing vocalists and a full rhythm section.

Promoter Rocco Buonvino engaged The AllStars to produce all of the music elements of the show which ended on a grand finale with all the guest artists and house band joining kids from the Royal Docks Community school singing ‘We Are The World’ along with Quincy himself.