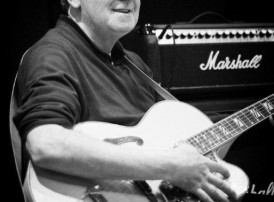 Born in Glasgow, Scotland on November 26, 1945, Jim Mullen began his musical life aged 8 playing “Tea-chest bass” in the neighbourhood skiffle group. He got his first guitar the same year, and when an older friend introduced him to jazz, he was hooked.
After leaving school he trained as a journalist while playing on the local music scene. He formed a group with Malcolm Duncan and Roger Ball (later of the Average White Band) and they worked throughout Scotland playing Coltrane tunes and originals. It was in this group that he started attracting attention and in 1969 he moved to London, going on to work in the groups of Pete Brown, Brian Auger, Vinegar Joe and Kokomo.

In 1975 he met sax player Dick Morrissey and began a 15 year association which produced 7 albums and became one of Britain’s top club bands. After the demise of Morrissey Mullen he worked with jazz vocalist Claire Martin (3 albums) and formed a series of quartets (3 albums). As a sideman he is in demand by visiting U.S. stars like Gene Harris, Mose Allison, Jimmy Smith, Weldon Irvine, Percy Sledge, Teddy Edwards, Plas Johnson, Jimmy Witherspoon, and Terry Callier.