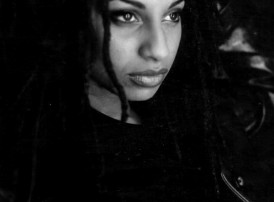 Imaani has performed worldwide on television, in the studio, and live – with such luminaries as Jocelyn Brown, Gloria Gaynor, Incognito, Betty Wright, Mica Paris, Stephen Marley, Julian Marley, Carleen Anderson and Leon Ware, to name but a few. Her emotive lead vocal contributions can be heard on the Urban Species Blanket album, Incognito’s ‘Eleven’, ‘Beneath The Surface’ and ‘Adventures in Black Sunshine’ albums, as well as many other collaborative projects from The Soca Soul Orchestra to The Super-Phonics.

Imaani was the UKs entry to the 1998 Eurovision Song Contest with ‘Where are you’ she performed in front of a live audience of 15,000 and a worldwide TV audience of a staggering 100 million people. The success of this performance resulted in a top 15 position in the UK chart and a celebrated number 1 position in several European countries. This led to numerous TV appearances both here and abroad. The follow-up single ‘You Got a Way’ had equal success charting in the top ten of countries as far and wide as Estonia and Aruba. Imaani then joined forces with Garage outfit Dub Conspiracy & Tru Faith and together they smashed the UK charts with their single ‘Freak Like Me’, which went straight in at Number 12 becoming a dance favourite that still graces the club scenes and radio waves. Her recent lead vocal contributions for production unit Copyright and the award winning Defected label resulted in funky house tracks ‘Running Away’ and ‘Time’ which became hits in the UK and overseas. Their newly released single ‘Bring Me Love’ promises to top their previous successes.

Most recently Imaani collaborated with such notable artists as Chaka Khan, Steve Winwood, Jocelyn Brown, Amp Fiddler, Omar and Carleen Anderson as part of The Hope Collective on the charity single ‘Give and Let Live’ in response to the Tsunami disaster in South East Asia. Imaani is currently enjoying her third world tour as lead vocalist for Incognito And as well as travelling the globe she has been concentrating on writing and recording her long awaited debut solo album.