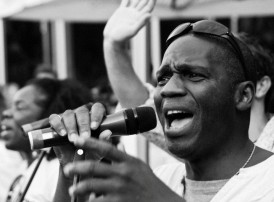 An artist with an eye to the future, but whose musical pedigree is genuinely respectful of the past. Called by some ‘old-skool’ and by others ‘cutting edge’, Angelo Starr is an accomplished singer/songwriter/guitarist, record producer and musical director. The younger brother of soul singer Edwin Starr, Angelo cut his teeth touring & performing with him at top-flight venues throughout the world including New York’s Madison Sq. Gardens, London’s Royal Albert Hall and Wembly Arena, Canada’s House of Blues, and many many more…

Working as a producer and engineer for the UK Hip Hop label Kold Sweat in the 90’s, Angelo was responsible for helping to set numerous artists on the road to their own career in the music industry. Some ‘artists worked with’ include: Lemar – Alexander O’Neal Jack Ashford’s Funk Brothers – Edwin Starr – Chaka Khan – Another Level – Ronnie Jordan – Gwen Dickey’s Rose Royce – Shola Ama – Matt Goss