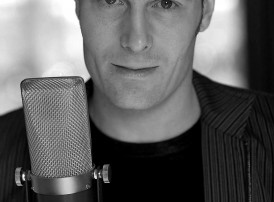 Brought up in the heady atmosphere of Feature Film production courtesy of his producer Father Andrew Mitchell who became Managing Director of Elstree Film Studios Andy became acquainted with the world of film and television and even the occasional pop star as he grew up on film sets meeting directors like Stephen Spielberg, George Lucas and Alan Parker and stars such as Harrison Ford, Barbara Streisand and Paul McCartney.

His decision to make his career in music was natural enough and he was given a wonderful start by training as an engineer at Abbey Road Studios.

After fronting a number of projects Andy began recording under the name Andy & the Other One calling upon the considerable talents of Jamiroquai keyboard player Matthew Johnson and fellow writers Austen Hornbrook and John Falcini.

Having recorded three albums so far “Songs From the Bottom Drawer”, “La La La I’m not listening” and “I’m a Nonentity get me out of here” Andy continues to write and produce his own brand of laconic funky R&B.

In addition to his music production he has made several promotional videos to accompany his audio output that highlight such diverse areas as The Third Iraq War, the current obsession with celebrity and Today’s media’s effect on Politics.